Photography with Love and Dignity

Posted by The Thing With Feathers - Laura Cook on May 27, 2014 in Humanitarian photography, Technique and Tools, Visual Storytelling | 134 Comments

What the poor need most is not pity but love. They need to feel respect for their human dignity, which is neither less nor different from the dignity of any other human being. 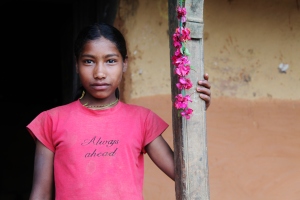 Khadisara (age 13 in this image) is NOT just a girl living in poverty. She is a helpful girl who cares deeply for her mother and does all she can to support her younger sisters. She is a girl that did not want to pose with a cheesy smile. It wasn’t ‘her’. She is a girl that wanted to share her story. (Taken in 2012 for All We Can in Nepal)

I do not photograph ‘the poor’. I photograph people. Some of these people happen to live in poverty, some sadly live in extreme poverty. I agree with Mother Teresa, ‘the poor’ do not need pity, they need love. We all do don’t we? We all deserve to be treated with dignity and respect, I would argue that the vulnerable in society even more so.

A conversation on LinkedIn has prompted me to write on my blog today and to use words that others may find fluffy and off-putting, words like love.

I believe that in my work as a visual storyteller love has to be an inherent part of what I do. I should treat all people with love. Love should mean that when I am working for an NGO* and taking photos for them I will always make sure my subjects (often vulnerable) understand how these images are going to be used. Where possible love means these human beings, key to the story I am creating, also participate actively in helping me create my images. Love means I will respect their wishes either way. Love means I will make efforts to make sure they get to see their photographs. Love means I will not create images that strip them of their dignity or show them as a faceless victim of famine/poor sanitation/crop failure/abuse. Love means I will make every effort to show the work of the NGO well but I will also work with the people they serve and work alongside them in a gentle way. Love means I will show the struggle but that I will also show the humanity within that struggle. The joy, tears, pain, laughter and relationships that are what make us human. The camera will only ever capture moments in time but love means that I want those moments to be an honest reflection of the story, of the struggle and of the people. Am I perfect at capturing these moments and stories yet? No, but I want to be. Not only will it make me a better photographer but hopefully a better human being too.

I work both as a photographer and as a participatory photography facilitator**. I love to do both as I get such joy seeing people enabled to tell their own stories. I still remember a woman in Malawi’s joyful exclamation “For the first time people see us. We have a voice.” as she saw her photographs on display. I saw fantastic reactions from the UK public viewing the work too as for many of them this was the first time they had seen photographs taken by the people they donated money to and supported. One woman said “I would never have guessed someone takes more pride in their garden than me”. The humanity was easy to encapsulate in these galleries as no longer were the images of victims taken by an outsider, they were images taken by survivors and photographers.

Of course I believe there is a place for professionals working as photographers for NGOs (I am one!) but I think as charities become better advocates for those living in poverty they should also become more aware of how the images they produce impact on the way the donating public in countries like England perceive those they give money to support. Some charities are getting this really right but an awful lot are still getting it wrong.

As someone who has worked for a number of international development NGOs (and continues to do so) I know that the majority of charities want to show the value of the people they work with. Unfortunately though images produced by some charities are missing the dignity and the love. They settle for stereotypical images of the ‘archetypal poor child staring up at the camera with tears in their eyes’. Some of them also put words in that child’s mouth, I have seen at least two campaigns in the last year that use posters telling us what the child would say if they were old enough to talk. People have labelled this kind of imagery Poverty Porn. Photographs and words designed to appeal to the donor wanting to give money.

In this interesting article Weh Yeoh looks at the role the NGO plays in deciding their marketing strategy (this of course includes not only images but also words). He says that “effective marketing brings attention and donations. Good development work should improve the lives of poor people” and does not believe that NGOs can do both. He looks at the power balance between the donor (the market) and the NGO beneficiary and notes that an effective marketing campaign will always favour the donor. He says that “unless we change the way we consume communications as human beings, overly simplistic marketing tactics will always butt heads with good development work”.  I agree but want to focus on the hope in the first part of his conclusion. I think as an image consumer and an image maker it is up to us to change the trend and bring back the love and dignity.

I belong to the International Guild of Visual Peacemakers and encourage you to have a look at their site whether you are a photographer or a consumer of images. This group subscribes to a set of ethics encouraging image makers to engage with their subjects in a meaningful and honest way. They believe that the way in which visual content is created directly impacts both subjects and the outcome of the work itself. Visual peacemakers must be mindful of the person and the picture. They also have a Charter for Visual Peace which is an excellent set of statements all visual consumers can sign up to (that is most of us!). I want to include one of those statements here as I think they sum up well how we could change the way we consume communications:

“I commit…..To not make sweeping generalizations or harbor stereotypes based on images. And when certain images impact me in a remarkable way—either positively or negatively—I will seek more information on the subject involved.” (IGVP Charter for Visual Peace)”

I do not have a magic solution to the complex problems outlined here. What I do know though is that I want to be someone that shows love and compassion in the way I work with people. I also understand that my photography is subjective; that I make choices about what to include and leave out of the frame. My images will only ever capture a moment. What I can do though is work my hardest to make sure that moment reflects their humanity. The person within the frame deserves dignity and love. We all do.

**Participatory photography is photography involving the people that would normally be the subjects of the work. These individuals are trained to use cameras and to tell their own story.