Shooting Poverty: A Reflection on the Language of Photography

Posted by The Thing With Feathers - Laura Cook on October 25, 2012 in Humanitarian photography, Visual Storytelling | 2 Comments

Make visible what, without you, might perhaps never have been seen.

Take aim, get ready to shoot…..and fire! We use such emotive and violent language in photography; when we are not ‘shooting’ people we are ‘capturing’ them, we ‘take’ photos, we burn images, we ‘fire off’ a round of shots. Part of the very essence of creating an image is to decide what you want to procure from the scene in front of you. When we hear the mechanics of our camera kick in we also acknowledge a moment in time has been captured. We bag the snap and then we own that moment. All of this is part of being a photographer but I want to take some time to dissect that language with reflection on what that means to be a humanitarian photographer.

Capturing a Moment: The photographer owns the photograph but when I go out and create images I never want that to be translated as possessing the moment itself. Often the world’s poorest people are reduced to stereotypes within Western imagery. They become a mute and static object in the frame to serve a media demand (even after the war in Sierra Leone had ended press photographers still went on assignment looking for children wielding knives) or a piece of NGO communications. Most decent NGOs now want to work alongside people in an equal and respectful relationship through their development programmes and many try to translate this in their images and yet some still insist on repeating tired and unacceptable images that should have been left in the 1980s. We do not, nor will we ever, own the moment or the people who are in our images. At best we can only ever produce our version of events.

Shooting: What a horrible word to use to describe ‘writing with light’. I am a romantic, I like to think of myself as a creative dreamer who crafts images. The word ‘shooting’ brings up imaginings of war or hunting. Sometimes though we do run the risk as photographers of stalking our subject like a tracker would pursue a deer. It is vital to remind ourselves that the person is always more important than the picture, even when the picture is really good! The moment I don’t get emotionally involved with the people I work with or the second I get blasé about the poverty they face I will step away from this job and pray good and hard about my attitude. I ask you as readers to give me a good talking to as well if that ever becomes the case! 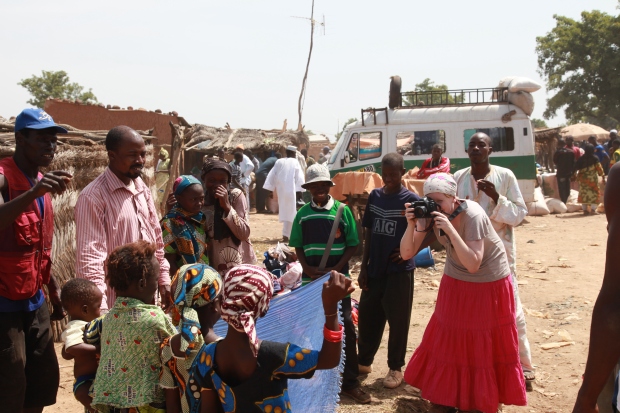 In the field ‘shooting’ for an assignment. This was lots of fun because I had time to chat and get to know the kids first (who were more than happy to pose away!!)

Burning an Image: This phrase has literal meaning, we do of course burn images to paper or screen (at first with chemicals and now with CD burners). This phrase is one I like though as the words remind me of the power in creating an image. With digital photography we have separated ourselves a lot from the physical process of producing a photograph but it still exists of course. I love the word ‘burn’ because I truly believe a great image can ‘burn’ its way into public consciousness and can change things. Photos can also burn in our memory; many of the world’s most poignant moments are recorded mentally through visual images. We have the opportunity to do great things through photography. We can make visible what would otherwise have been unseen. We can burn images that set the world alight and act as a light in the darkness.

Sierra Leone used to be defined by negative images of war, we can change that picture with our photographs.

Snap – A quick ‘snap’ is what photography has become. People can now snap away thousands of photographs on their digital cameras. I love digital photography and I am not complaining about this – I snap away at things too! There is value in also taking things slow though, especially when ‘imaging’ the poor. Some of my most special moments out on assignment have been with the camera in my hands chatting to those who will later appear in the photos. Getting to know people, showing them I am interested in them and their situation not only helps me keep in touch with why I do what I do but also often leads to a much better, and more honest, photo. 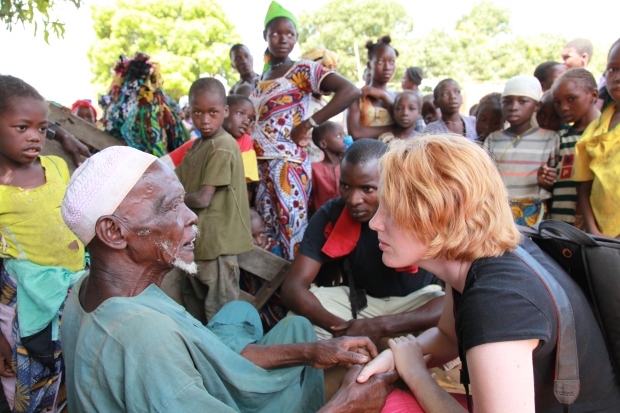 Taking time to chat to people, to greet people, to get to know those you are taking photos of is vital. Don’t just ‘snap’ away, treat people with dignity. (Photo of me in Mali by Phil Knox)

The words we use to describe our craft are dramatic and violent but they can also act as a reminder. When I hold a camera in my hands I have a lot of power. Just like a man shooting a gun I can change lives with the shots I get. I can destroy lives when I have not taken the time to get to know someone’s situation properly or I can give life when that photo is then used to fund a project or raise awareness of an unknown issue. So fellow photographers shoot kindly, fire with care and capture what is yours but do not take what is not.