MRDF Harvest Pack Project: From Mali to the UK With Love

Posted by The Thing With Feathers - Laura Cook on October 10, 2012 in Humanitarian photography, MRDF, Publications and Awards, Visual Storytelling | Leave a comment

One of my biggest humanitarian projects has been creating the images for the 2012 Methodist Relief and Development Fund (MRDF) Harvest pack; one of their major fundraising resources. MRDF exists to bring about significant and long-term change in some of the world’s most marginalised communities, and to empower people to change structures that are oppressive and unjust. The yearly Harvest pack is produced to inform people about their work as well as to inspire giving to some of their projects. In November 2011 I went to Mali in West Africa to find out more about how MRDF was supporting farmers to enable them to produce a better harvest in an often harsh environment. 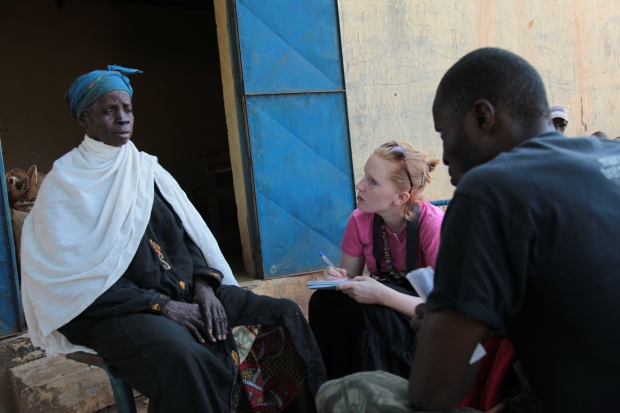 Interviewing people in Kolflo, Mali about their maize and peanut harvest

I spent four days working with a community in Kolflo in Mali looking at how interventions such as small loans and agricultural training had enabled farmers to increase their crop yield as well as store away produce for the future. Western Mali is often prone to both flooding and drought so it is prudent for farmers to do their best to plan ahead for the future.

Peanuts (known as groundnuts in Mali) are wonderful things! They grow easily in even harsh conditions and if planted at the right time can yield two or even three crops during just one season of growth.

The main case studies for the Harvest pack were about two wonderful women called Baro and Korika who clubbed together to create a small market business selling the peanuts they grew with some training from an MRDF partner and with a small loan. They were inspirational women as they greeted life with such a sense of joy and determination.

Korika and Baro enjoy running their small business together in the market knowing that working with one another increases their profit and their chances of bettering their children’s lives.

Smiles all round as Baro and Korika collect their peanuts from the field they share.

The images and case studies I brought back from Mali have now been turned into a Harvest pack that has been used by many churches in the UK.

One of the posters created for MRDF’s 2012 Harvest campaign.

MRDF created a CD ROM that includes selection of resources to help churches respond to global need during the Harvest period. This image comes from one of the PowerPoints and bears the title of the 2012 campaign: ‘Securing a Brighter Future’

To find out more about the work of MRDF or to order these resources go to http://www.mrdf.org.uk/.

Like Loading...
← Giving Wildlife Photography a Go in South Africa: My Favourite Images from the Assignment International Day of The Girl: Take That Pink Ribbon Off Your Eyes! →